Saving the Herd
Get up close and personal with elephants and black rhinos at a nursery in Nairobi. You’ll meet orphaned animals that Kenya native Dame Daphne Sheldrick, an international authority on the rearing of wild animals, has rescued and rehabilitated. The David Sheldrick Wildlife Trust, named after her late husband, runs the nursery where the orphans are raised before they are returned to Tsavo. You’ll even have the opportunity to foster one of these magnificent creatures. 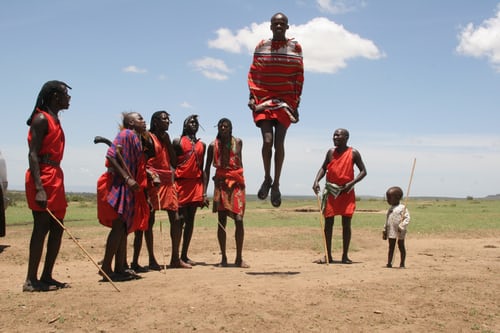 Artful Outing on Mount Kenya
Take a mesmerizing helicopter ride over the majestic wilderness of Mount Kenya, the second highest peak in Africa. After a picnic breakfast on the shores of a remote alpine lake, you’ll have a chance to fish for rainbow trout. Then you can visit the rustic Rutundu Log Cabins on Lake Rutundu where Prince William proposed to Kate. Here you’ll share lunch with accomplished wildlife artist Peter Blackwell, whose work has been described as “fresh and innovative with an unconventional flavor.”

Incredible Lakes
A helicopter carries you over the breathtaking Rift Valleyand through the multihued Suguta Valley, where you’ll spy countless flamingos on Lake Logipi. Turquoise-colored Turkana, the world’s largest permanent desert lake, soon comes into view; you’ll land for a short water crossing to the South Island. Anglers may obtain permission to fish for giant Nile Perch from the shores. Wild in character, with parched volcanic beaches and granite outcrops, Lake Turkana is home to a huge population of Nile crocodiles, as well as hippos and hundreds of species of birds and fish.

Here at Juvelo Travel our goal is to design travel journeys that are tailored to each individual client. To create trips that have those little touches that connect each person to the destination they are in. It doesn’t matter if that is a wine tour through France, a safari in South Africa, walking the Great Wall of China, seeing mountain gorillas in Rwanda, or bungee jumping in New Zealand. My job is to design your travel so that it’s special for you and I love doing it. Nothing makes me happier than listening to someone tell be about their trip, what they did and the experiences they had along the way.